New members appointed to University of Michigan Health System Board

Board will include leaders from medicine, business from outside U-M

ANN ARBOR, Mich. — Health care and business leaders were appointed Thursday to the University of Michigan Health System Board, after approval from the U-M Board of Regents. 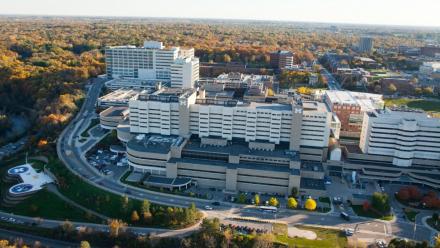 This new governing board will include leaders from outside the University for the first time.

“We believe these individuals will bring significant collective experience and expertise that will benefit the Health System,” says Marschall S. Runge, M.D., Ph.D., executive vice president for Medical Affairs, dean of the U-M Medical School, and chief executive officer of the Health System.

“This group will provide a strong and effective board that I know can help us reach our strategic goals and prioritize our missions of research, education and clinical care.”

Regents approved seven additional members to the board:

Hurn was appointed as the dean of the University of Michigan School of Nursing in August 2016. Hurn came to U-M from the University of Texas System, where she was vice chancellor for research and innovation and an executive officer. She is internationally known for her work in understanding the cellular and molecular basis of gender differences in response to experimental brain injury. Hurn has been the principal investigator on more than $20 million in grant-supported research.

Sheehy is a co-founder and chief executive officer of Bright Health, a next generation health insurer and executive partner at Flare Capital Partners, a healthcare investment company. Sheehy is the former chief executive officer of United Healthcare, where he worked for more than 20 years. He led all of United’s acquisitions that were health plan focused during a period of tremendous corporate growth. Previously, Sheehy served as president and chief operating officer of United Healthcare for seven years before assuming the role of senior vice president of UnitedHealth Group.

Tremper is the Robert B. Sweet Professor and chair of the U-M Department of Anesthesiology.  During medical school and during his internship at Harbor/UCLA Medical Center, he became involved in the clinical testing of the first “artificial blood” product in 1981.  In the mid-1990s he initiated a co-development effort with a software company to create a perioperative information management system for patient care, education, and clinical outcomes research. This was purchased by General Electric and today the U-M Department of Anesthesiology is the development site for General Electric’s perioperative software.

Udow-Phillips is the executive director of the Center for Healthcare Research & Transformation. Previously, she served as director of the Michigan Department of Human Services from 2004 to 2007, appointed by Governor Jennifer M. Granholm. Udow-Phillips came to state service from Blue Cross Blue Shield of Michigan, where she served in a number of leadership roles for over 20 years, most recently as senior vice president of Health Care Products and Provider Services, with responsibility for the BCBSM social mission, health policy, data analysis, and care and network management programs. She also served as senior vice president and vice president of Plans and Operations for Mercy Alternative and Care Choices.

Yamada originally joined Frazier Healthcare Partners as a senior advisor in 2006 and rejoined Frazier as a venture partner in 2015.  Before re-joining Frazier, Yamada was chief medical and scientific officer at Takeda Pharmaceuticals in Tokyo, as well as a member of the Board of Directors. In this role, Yamada was responsible for all of Takeda’s research & development activities, with a budget of nearly $4 billion.  Prior to Takeda, Yamada was president of the Bill & Melinda Gates Foundation Global Health Program in Seattle, where he oversaw over $9 billion in grants to address major health challenges of the developing world. Previously, Yamada was the chief of the U-M Division of Gastroenterology and chair of the Department of Internal Medicine.